After Rupert and Earl escape in an escape pod on Zok, Dopey Alien accidentally crashes it on Ankor, the home planet of Galaxoid and Nebular. It is a peaceful planet where the species there copy the minds of the aliens new to the planet. Because of this, Rupert and Earl get almost brainwashed. 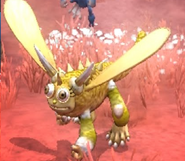 Rupert also mentions another type of species on this planet called a Ankorian Zokark, however it has never been seen or mentioned again.

Community content is available under CC-BY-SA unless otherwise noted.
Advertisement